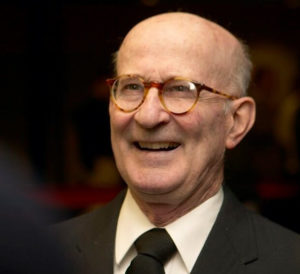 Story of the Long Walk

I’ll tell you one thing!” This line was one of Bro. Francis’ oft-used expressions. And one could be certain that Bro. Francis had more than one thing to tell you as he would begin a lively conversation or story with a beaming smile, punctuated throughout with his trademark laughter.

Bro. Francis died at the age of 89 following a year and one-half residence at a nursing home. Bro. Francis hailed from Osmond, Nebraska. Richard – Bro. Francis’ baptismal name – was born on February 18, 1930 to the late Benedict and Lillian (Kratochvil Stanosheck) Schmitz. He attended Saint Mary’s Catholic Grade School. Following graduation from Osmond High School, Bro. Francis studied at Wayne State Teachers College where he earned a Bachelor of Arts degree in education and in physical education. After continuing his education at Conception Seminary College, Bro. Francis worked in Omaha in construction and in meat-packing jobs prior to entering the novitiate at Mount Michael Benedictine Abbey. Bro. Francis professed vows on the feast of Saint Joseph, March 19, 1962. He and Bro. Andrew were the first lay brothers to profess vows at Mount Michael.

Since his profession, Bro. Francis shared his talents in a number of ways to the Abbey and to the School. He was initially meat cutter and school kitchen worker, the school’s Director of Inter-school Athletics, Athletic Director, baseball coach, groundskeeper, athletic equipment manager and custodian of the house. Bro. Francis and Bro. Andrew were responsible for establishing the Christmas tree farms on campus.

Bro. Francis exuded grit, tenacity, dedication and faith. Here another of his colloquialism’s comes to mind: “One step at a time!” Grit and tenacity? Bro. Francis would doggedly see a project or task to its ultimate completion. Working on a road construction crew just after high school, a co-worker quipped to this somewhat diminutive man that if he wanted to join the Osmond Tigers baseball team for their game then he would have to walk home. Not to be outdone, Bro. Francis replied that this feat could be done in under fifteen hours. So immediately after work on Saturday Bro. Francis set off for home, covering the fifty-two miles from Wynot to Osmond in about thirteen hours. Or who could forget his tenacity in the late 80’s when out in the far north gullies doing some work the tractor rolled over him. Bro. Francis commando-crawled back as far as the track where someone discovered him and called for help.

Dedication? Bro. Francis had a very strong passion for sports. In baseball, it was the Saint Louis Cardinals and in football he kept up with the Nebraska Cornhuskers. His special love was Mount Michael athletics. Bro. Francis had unwavering loyalty to all Mount Michael athletic teams and was not afraid to challenge friend or foe to find a better athlete or team than a Mount Michael one. He was well-known for his famous “predictions” of the game’s outcome. As equipment manager, Bro. Francis was found on the field or on the basketball court tending to equipment or to players. Sometimes his zealous game time enthusiasm would find him next to Coach Jim Kane after a big play or an official’s call giving the business to player or to official. And after the lights were dimmed on the field or on the court one could find Bro. Francis washing, drying and repairing the uniforms in the Abbey laundry room into the wee hours.

Faith? Bro. Francis never missed monastic prayer or daily Mass. His voice was a long-time staple in the monastic schola. At a Nebraska football game, Bro. Francis would wear his heavy parka and his over-sized radio headphones cheering on his team, but when the internal bell tolled mid-game he would remove the headphones, pull out his well-worn breviary from his parka pocket and sit amidst the screaming fans to pray the Office.

It was Bro. Francis who in one of our vocational videos said with a chuckle, “I came here and I plan to die here!” He accomplished what he set out to do and the monastic community is better for it and grateful for his monastic witness.