Mount Michael Abbey is part of the Western monastic tradition that traces its roots to St. Benedict of Nursia. St. Benedict lived in Italy during the late 5th century and into the early part of the 6th. What we know about the life of St. Benedict comes to us from the Dialogues of St. Gregory the Great, a 6th century Pope. In the Dialogues, Gregory tells the story of how St. Benedict grew to desire a monastic life and later became the founder and leader of many monasteries in Italy. 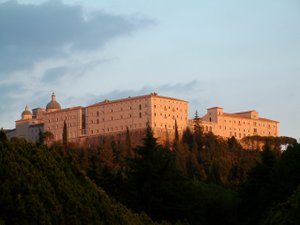 While not all of the stories in the Dialogues about St. Benedict would be deemed historically true, they do give us insight into a general framework of the events that shaped his life. St. Gregory tells of Benedict’s youth and early flight from the world, his struggles with asceticism and the early attempts at leading communities of monks, his success in establishing the monastery of Monte Cassino, his relationship with his sister St. Scholastica, and finally his composition of the Rule for Monasteries.

St. Benedict’s Rule has become important in learning much more about the man himself. Written towards the end of St. Benedict’s life, it was primarily used by monks in Italy who lived in communities that were founded by the members of Monte Cassino. Eventually, it spread to areas in France and Germany where it was used along with other Rules to guide the growing number of monasteries that were spreading throughout Western Europe. In the early 9th century, in an attempt to unify Christian practices throughout the Holy Roman Empire, the Emperor Charlemagne, under the influence of St. Benedict of Anian, declared that all monks of the West should adopt the Rule of Benedict as their guide. The Rule has since spread throughout the world and is followed by Benedictine, Trappist, and Carthusian monks still today.

Mount Michael Abbey as a Benedictine Abbey traces its roots back to one of the Monasteries in Western Europe that was founded shortly after the Rule was established as normative for the Empire. Engelberg Abbey was founded in Switzerland in 1082 by Blessed Conrad, Count of Seldenburen, who chose Blessed Adelhelm, a monk of the Abbey of St. Blasien in the Black Forest to be the first Abbot. The monastery flourished for centuries. In 1873 it sent a group of monks to America in order to found a house that may be used for refuge for the monks who might need to flee the turmoil that was beginning to ferment in Europe of the time. The monks established Conception Abbey in Conception, Missouri, with Fr. Frowin Conrad acting as its first superior.

Conception Abbey flourished in the rural setting of Northwest Missouri. Soon it established a school and seminary. The school also found success and grew substantially. In the early 1950s the school had such an enrollment that Abbot Stephen Schappler began to look for a place to which he could move the minor seminary. In 1952 he found a willing host in Omaha Archbishop Gerald T. Bergan. Abbot Stephen sent Fr. Dominic Lavin to Omaha to find a property for the new foundation. Fr. Dominic’s persistence brought him into contact with Mr. Rex Olsen. Olsen soon generously donated his farm, Journey’s End, and the first monks were sent to Omaha on May 14, 1953.