Letter from the Abbot 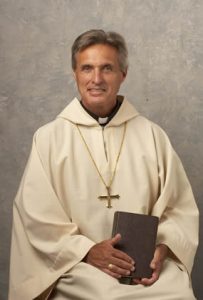 A check in the mirror is good practice before venturing out into public. Not that every hair is impeccably in place, or every outfit immaculately clean. But a lack of care for appearances might suggest important considerations are being neglected. Both human beings and institutions benefit from occasional self-examination.

In keeping with this valuable practice, every four years each monastery in the Swiss-American congregation has a visitation, an occasion for introspection and scrutiny. Mount Michael Abbey had its visitation in early June of this year. Two monks from other monasteries in the congregation came as visitators. They were Fr. Patrick Caveglia, OSB of Benet Lake in Wisconsin and Br. Zachary Wilberding, OSB of St. Meinrad Archabbey in Indiana.

Before the visitators arrived, a committee of monks of Mount Michael created a questionnaire to which each member of our own community responded. The questionnaires were collated and reviewed. Based on the feedback, the committee devised a report and submitted it to the visitators before their arrival. The report provided the visitators a preview of concerns to address and even overlooked opportunities to explore. In addition, the business office submitted an audited financial statement for review. The financial report is to ensure that the abbey is on a sound financial footing and that it is adhering to financial practices required by the congregation.

A brief opening meeting was conducted by the visitators on the first evening of their stay. In the following days, each member of the community spoke individually with the two visitators. Each was encouraged and allowed to speak freely: to make suggestions; to speak of worries; or to identify issues that the individual felt warranted attention. The visitators listened to and conversed with each monk. They then compared notes and assembled their thoughts. The visitators are charged with writing two reports – one for the entire community and one for the abbot. The report to the abbot is needed in case there are sensitive items which involve any individual monk which might not be appropriate for the entire group. On the evening before their departure, the visitators gave their report to the abbot and to the community. Questions and clarifications were entertained so that everyone could be satisfied with the report.

Once the reports are completed, more work remains to be done. The reports are sent to the abbot president of the congregation. Both the abbot and the visitation committee must send a response to the abbot president in reply to items that surfaced during the visitation. Otherwise, the visitation might be a nice exercise without helpful consequences. On behalf of myself and the entire community, our thanks to Fr. Patrick and to Br. Zachary for giving their time and energy to this endeavor. We are grateful for their honesty with us and their efforts. It is a challenge to provide a community with a candid assessment of their prayer and work, the two mainstays of Benedictine life.

In retrospect, I can say that the visitation highlighted three major challenges for Mount Michael Abbey. The principal challenges are related to the aging of the members of the community and the lack of vocations that the community has seen. Pursuant to our previous visitation, the community had developed a plan to support and foster vocations. The plan relied on outreach in the local community both for financial support and for support in directing vocations to Mount Michael. Because much of that endeavor relied on outreach, the arrival of COVID-19 undermined that effort. We were forced to retreat into isolation. Now that the coronavirus is less of a concern, we hope to re-invigorate our efforts to identify and recruit vocations.

Two related challenges are a consequence of the aging of the community. We want to ensure that each monk receives appropriate care, especially when he is no longer able to take part in community life. We want to ensure that the Catholic and Benedictine character of the school endures, should it be that very few or no monks are able to work in Mount Michael Benedictine School. Both are prospects for which we are trying to prepare.

We have learned and believe that the future is in God’s hands. To the extent that we can, we shall hope to continue to be the hands of God at work in the world.