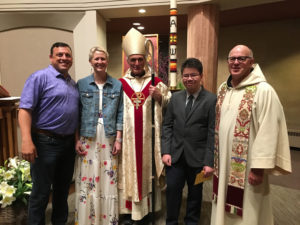 Due to the presence of a religious community on campus, Mount Michael is able to offer a full set of liturgies during Holy week.   They were all well attended nearly filling the chapel for the Easter Vigil and Easter morning Mass.   At the Easter Vigil  Denise Salzbrenner the wife of alumnus Tim Salzbrenner ’94 was received into the Roman Catholic faith.  She also was confirmed along with Mount Michael sophomore Huy Le.