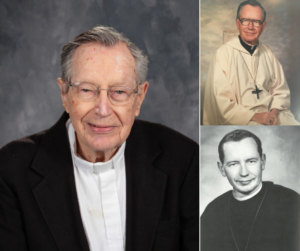 Abbot Raphael Walsh died at the age of 92 on April 25. Abbot Raphael continued to defy and challenge expectations despite or in spite of a weakened heart. Up to the very end Abbot Raphael did his very best to keep the monastic horarium or schedule.

It might be said that Abbot Raphael gloriously reigned for 92 years! Abbot Raphael was born Eugene “Gene” Walsh on January 28, 1927, the fifth of seven children, to the late Francis and Helen Walsh. He was happy to recall his Dogtown roots in the traditionally Irish section of Saint Louis. Gene attended Saint James Grade School in Saint Louis and then enrolled in the minor seminary program at Conception Abbey.

Following the completion of his minor seminary studies, Gene entered the novitiate of Conception Abbey. He made his first profession of vows on the feast of Saint Benedict, July 11, 1946, taking for his monastic name Raphael. He pursued philosophical and theological studies, culminating in his presbyteral ordination on May 30, 1952 by close family friend Saint Louis Auxiliary Bishop John P. Cody.

Father Raphael was assigned teaching duties in Conception Seminary College; moreover, he was assigned a number of monastic roles. Conception Abbey Abbot Stephen Schappler showed confidence in Father Raphael, naming him sub-prior in 1959 and prior in 1960. On October 6, 1964, Prior Raphael was appointed abbot of Conception’s Elkhorn, Nebraska monastic foundation Mount Michael Abbey. The blessing of Prior Raphael as Abbot of Mount Michael on January 5, 1965, in Saint Cecilia’s Cathedral by Auxiliary Bishop Daniel Sheehan of Omaha was a seminal moment as it marked the first concelebrated Mass in the Archdiocese of Omaha. The event was carried live by a local news station. Once again Abbot Raphael’s family friend John P. Cody, then Archbishop of New Orleans, delivered the homily at the Mass.

Abbot Raphael served as abbot of Mount Michael for nearly 25 years. During this time Abbot Raphael guided the community through the changes in the Church following the Second Vatican Council. He also helped lead the community’s primary apostolate to transition in 1970 from Saint John Seminary to Mount Michael Benedictine School. While the Abbey and School were near and dear to him Abbot Raphael also took parish assignments throughout the Archdiocese of Omaha and beyond. He was active in Teens Encounter Christ, in the Knights of Columbus, and was a Knight Commander with Star in the Knights of the Holy Speulchre. 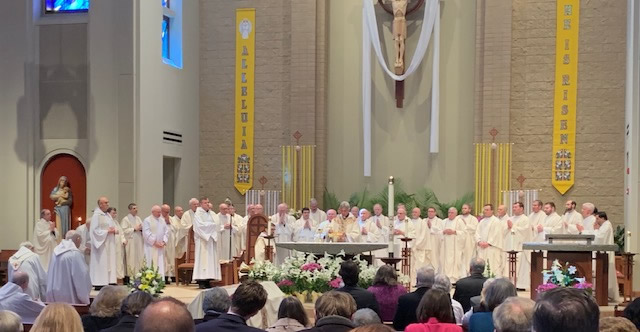 Concelabrants gathered around the Alter at St. James Parish for the funeral of Abbot Raphael

On February 10, 1989, Abbot Raphael resigned as Abbot of Mount Michael. But Abbot Raphael was quick to point out that he never retired! He briefly worked in the Advancement Office and as Vocations Director before accepting a role as associate pastor of Saint James Church. Abbot Raphael enjoyed his thirteen years with the Saint James faith community. Called back to the Abbey, Abbot Raphael was president of Mount Michael Benedictine School from 2003 to 2011. After his stint as president Abbot Raphael could not sit still and just read or golf so he gave his time, energy and passion once again to serving in the Advancement Office on behalf of the Abbey and the School.

Appropriately the day of Abbot Raphael’s death was the Feast of Saint Mark, Evangelist. Abbot Raphael tirelessly preached the Gospels, wanting to bring the good news to all. He spent much time in the monastic discipline of lectio divina and his homilies, his sacramental ministry, his spiritual direction, and his retreats reflected a deep faith and close familiarity with the Word. And what Abbot Raphael taught he also tried to reflect in his daily living.

Abbot Raphael has left an indelible mark upon the monastic community and he will be missed.