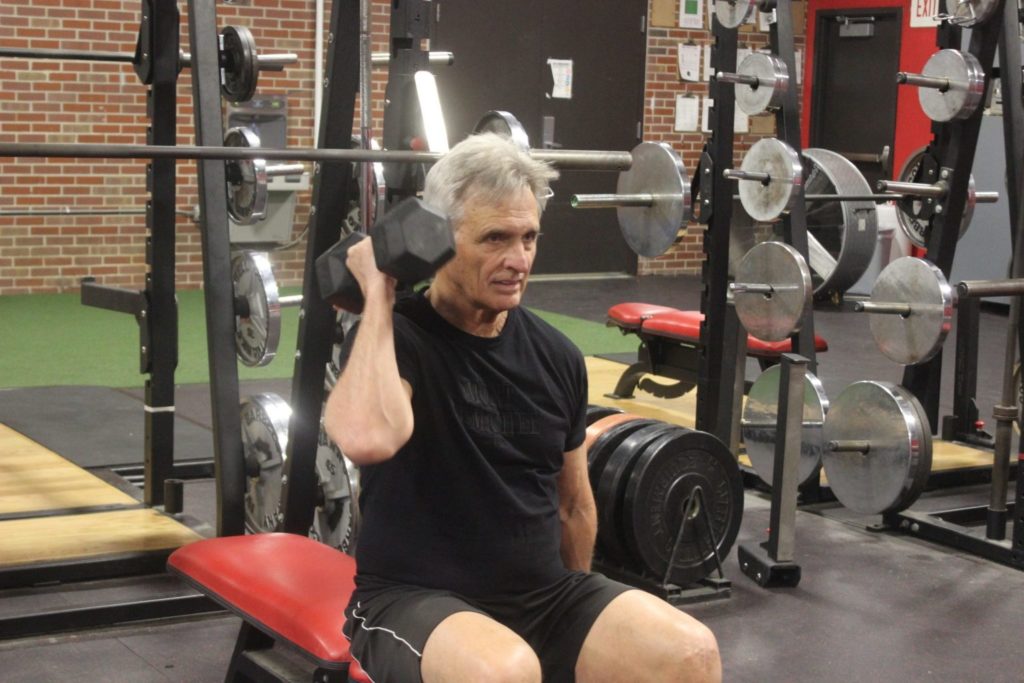 Abbot Michael Liebl ’68 does bicep curls in the weight room. Weight lifting is a regular part of the Abbot’s commitment to staying fit.

Every day students spend time in the weight room for a variety of reasons. Some are training for sports, some are in a class, and many do it just to stay in shape. However, all of these people have something in common.

They have all seen one man, a legend according to some. Everyone has seen Abbot Michael Liebl ‘68 crushing it in the weight room.

“I try to go in regularly and get some lifts,” Abbot Michael said.

According to most students, just “get some lifts” is a massive understatement. It is not uncommon to see freshman walking out amazed and confused, as they just watched one monk blow away all their lifting records combined.

“I try to alternate between upper and lower body exercises every other workout to get a balanced lift,” Abbot Michael said.

This basic lifting schedule, when paired with determination and years of experience, has allowed Abbot Michael to become one of the strongest men in the school. However, it is not a desire for beach muscles or the legendary status that keeps him going.

“I didn’t know that I had that reputation,” he said. “I’ve always worked out. I used to jog a lot.”

Despite Abbot Michael’s lack of knowledge regarding his reputation, the stories from everyone, from the newest freshman to the wisest alumni, have grown epic over the years.

“I’ve heard of things like if a basketball comes near him it explodes on contact,” Taggart Crouse ‘23 said. “He will smite you with God’s power; he can summon lightning at will.”

Yet, in the end, he is not some superhuman. He is just a guy with the desire to stay healthy. He does this on top of all his other activities as leader of the monastery, and a teacher in the school.

Sometimes this legendary status gets a little exaggerated, but everyone still understands that Abbot Michael is one of, if not the strongest, men at Mount Michael.

“I’ve seen him outside, often bicycling or walking around and doing things for exercise. Maybe he’s training up for something, or maybe he’s just staying in shape,” Ben Keller ‘21 said.

Abbot Michael serves as an example of what any Mount Michael student can become. He is busy, successful, and smart, yet he still finds time to stay healthy, both physically and spiritually.